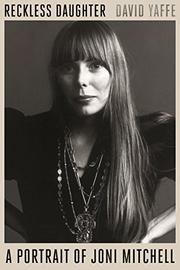 A Portrait of Joni Mitchell

A new biography of the luminous folk singer and musical icon.

If you don’t already believe that Joni Mitchell (b. 1943) is a genius without peer, you might have a hard time making the case from this effusive book, long on gossip but short on analysis, except of a kind of ethereal quality. As Yaffe (English/Syracuse Univ.; Bob Dylan: Like a Complete Unknown, 2011, etc.) writes, “Joni may have felt that she was the lone member of the Canadian lunatic generation, but it was her destiny to alchemize all that loneliness into music that made people feel they were not alone.” Meaning, one supposes, that Mitchell, nee Roberta Joan Anderson, wrote songs geared to sensitive people that amounted to a corpus that, as David Crosby once proclaimed, “was the highest quality of songwriting that I’d run into. I liked her better than Dylan or anybody.” Yaffe’s book is a useful appreciation, but it doesn’t delve enough into the whys and wherefore of that songwriting and its high quality—why an odd open tuning mixed with onrushing lyrics should alchemize into something like “Coyote,” say, though we do learn that there was a lot of sex and cocaine in LA in the 1970s and that Jackson Browne and James Taylor may not be the nice guys their public images suggest. “Even if cocaine fueled some of Hejira’s powerful songs,” writes Yaffe, “the clarity of going off coke produced other songs that came from a different and equally compelling kind of power.” That’s a soufflé of a sentence, and, like so much of the book, it needs more grounding in Mitchell’s actual work and at a deeper level than, for example, “it is on the bridge about the ‘lonesome blues’ that the chords get interesting.”

Mitchell deserves more musically sophisticated treatment, though this is serviceable enough as a straight fan-notes homage. Readers wanting to go deeper into the art would do better to start with Malka Marom’s Joni Mitchell: In Her Own Words (2014).