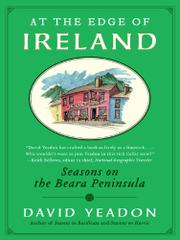 AT THE EDGE OF IRELAND

Seasons on the Beara Peninsula

The author has hit upon a winning formula: Disappear somewhere, preferably a wild, back-of-beyond place, then spend a year charting its seasons and exercising a strong streak of inquisitiveness. The Beara Peninsula is tailor-made for such an endeavor. Poking into the Atlantic off Ireland’s Southwest coast, it is stubbornly, gloriously remote, a long way from the tourist buses clogging the Ring of Kerry, but riotously alive with history, powerful landscapes and curious characters. Yeadon is one of those travelers you have to admire. He’s not afraid to make a fool of himself to gain insight, nor to look around at horse-and-buggy speed. Nothing epitomizes his refusal to hurry more than his evocations of the art of the pour, described in yearning detail as he awaits a pint of the black in the many pubs he enters with wife Anne, who adds smart observations along the way. While the Celtic Tiger makes its dent in the global economy, the Beara steps to a relaxed beat. On its narrow, windy roads, the author notes, “we’d been told many drivers were unlicensed, uninsured, and far too often, unsober.” The residents—a critical mass of musicians, cheesemakers, cooks, artists, poets, fishermen, shepherds, healers and crazy sportsmen—indulge in the sport of hurling, “an ancient bogman’s game of pure unrestrained, skull-crushing passion.” Yeadon meets them all and captures them in robust illustrations as well as words. When he needs to provide historical background, he makes it into a story, coaxing readers to engage in Ireland’s furious past filled with class warfare, famines, enclosures and colonial perfidies. He’s at his best when taking in the lay of the land: glacier-gouged mountain passes, stone circles, black-water lakes, moors and peat bogs, hills “as rugged as a rhino’s carapace” and the strange, unrepentant weather that marks life on the western shore.

A treasure chest of images that coalesce into a distinct, original sense of place and time.