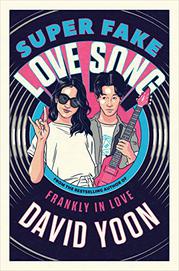 Fake it till you make it?

Unlike Gray, his aspiring rock star older brother, camera-shy Korean American teen Sunny Dae loves sharing his nerdy hobbies of live-action role-playing Dungeons & Dragons and designing cosplay props with his best friends, Milo and Jamal, despite the bullying he receives from a school jock. Milo is Guatemalan American and Jamal is Jamaican American, and the trio have bonded in their Southern California town that is over 99% White. Then Sunny meets Rancho Ruby High School’s newest student, the beautiful, worldly, music-loving, Korean American Cirrus Soh. Soon, he finds himself doing things he’s never done before, like pretending his brother’s band is actually his. Yoon captures the humor, the heart, and the universal anxieties—and possibilities—of trying on new identities in high school while also exploring microaggressions, toxic masculinity, bullying, parachute parenting, and classism. The book cautions readers against judging character based solely on outward appearances. Part of its brilliance lies in how it shows the ways Sunny’s and Gray’s desires for acceptance and popularity reflect what they see as their parents’ own efforts to keep up with the Joneses. Dungeons & Dragons fans will appreciate the symbolic parallels between Sunny’s story arc and the fate of the paladin figurine he made in middle school.