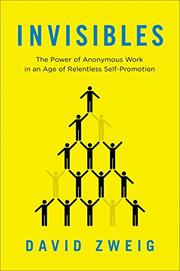 An encouraging salute to the world behind the scenes, where the “Invisibles” allow the show to go on.

Journalist Zweig suggests, with considerable merit, that, in our culture of wanting it all, we have forgotten the hard work of getting there—that to be Tom Brady quarterbacking on Sunday, you must also be a game-film drudge and a gym rat. More to the point, that invisible work has its own beauty and meaning. The author points to people who take pride in elevating anything to an art, who lose and find themselves in projects that make a significant impact on our lives, leaving us happy while delivering the pleasure and self-respect from doing the job properly. Zweig profiles a handful of highly skilled individuals “whose roles are critical to whatever enterprise they are part of”—e.g., the perfumer behind Sean Combs’ fragrance Unforgivable (Combs became “the first male celebrity with a prestige cologne”); the structural engineer who enables the architect’s vision of a skyscraper; and, perhaps most impressive, the U.N interpreter who “hears one language, interprets it into another language in her head, then speaks the new language while at the same time continuing to listen to and interpret the next lines of the original language, a practice known as simultaneous interpretation….As long as the speaker is talking, she is interpreting.” Zweig notes three traits that these unsung individuals possess: responsibility, meticulousness and ambivalence regarding recognition. These traits are fine, to be sure, but the author’s vignettes really drive the point home. Guitar tech, fact checker, piano tuner, cinematographer, ghostwriter et al.—it is workmanship, curiosity, demanding internal standards, deep immersion and cooperative instincts that bring a rewarding life.

In Zweig’s fascinating world, the limelight doesn’t hold a candle to the satisfaction of hard work well done.