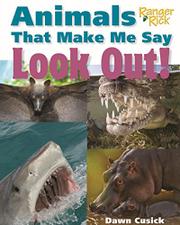 ANIMALS THAT MAKE ME SAY LOOK OUT!

The author of Animals That Make Me Say Ouch! (2014), …Wow! (2014), and …Ewww! (2016) offers a fresh set of stock nature photographs on the general theme of animal defensive behaviors and features.

That theme feels like it’s only a pretext, and she drops it halfway through anyway. In the first part, headed “Look out for animals on the defense,” she gathers views of wild creatures—predators and prey alike—flashing teeth or tusks, rearing up in aggressive threat displays, charging, playing dead, tussling, hiding, and using camouflage, venom, or skin poison. In the second, unrelated, section, she urges readers to “Look out for ways to protect animals.” Instead of offering any real concrete “ways,” however, she just identifies several dozen kinds of animals whose populations are declining from assorted hazards such as habitat loss or competition from invasive species. Some of the larger photos, at least—a drooling Florida panther, a crocodile lunging out of the water with jaws gaping, burrowing owls lined up alertly like avian meerkats, a tree frog hanging by one toe—rise above the ordinary. While casual readers will find the simply phrased descriptions and explanations next to the pictures easily digestible, a closing set of activities will give budding naturalists some healthy challenges.

Average visuals compared to other entries in the series and a formula that is plainly wearing thin.