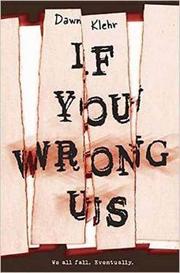 IF YOU WRONG US

Within the crumbling city of Detroit, two grief-stricken teens discover a tenuous thread that ties their personal tragedies together and concoct a sinister plan for vengeance.

Johnny is a handsome, olive-skinned, Mexican jock who excels at sports but has difficulties academically. Becca is a fair, red-haired honor student whose brilliance is overshadowed by her lack of social skills. The two, with seemingly nothing in common, meet coincidentally at a crash site where Becca's twin sister, Brit, and Johnny’s mother both died in a head-on collision. Becca, believing that the accident was anything but, befriends Johnny and convinces him to help her exact a plan for revenge. Their friendship deepens into romance, as does her control over him. When their plan goes horribly wrong—though wrong apparently only to Johnny—he begins to question the truth about Becca, their relationship, and their jointly diabolical plot for retribution. The story is told in short, keep-the-pages-flying, alternating chapters by Johnny and Becca, allowing readers to get into their heads as the intensity of their relationship ratchets to a darkly dangerous climax. Rife with angst and twists, Becca and Johnny's machinations seem to come to a somewhat far-reaching end; however, with the intense pacing and plotting, this should be easily forgiven.

An intricate psychological page-turner that explores the darker side of vengeance and reads like Gone Girl through a teen lens.