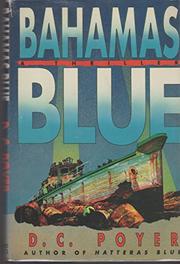 Cocaine executives drag a newly drug-free diver back into their murky business—then force him to raise a freighter that sank off the Bahamas with a large and valuable load of abusable substances. The hero's adventures began in Poyer's Hatteras Blue (1989). The modest hopes of hereditary Outer Banksmen Tiller Galloway and Shad Aydlett for a legitimate fishing and diving business to see them into their old age have been both incinerated and drowned. Sadistic, homosexual, cocaine-crazed Troy Christian, whose request for ex-con, ex-coker Galloway's assistance in a bit of bad business Galloway rudely refused, has ordered the sinking of Tiller and Shad's lovely Chris-Craft and the burning of their little store. The hugely overmortgaged sailors have no choice but to accept Mr. Christian's offer of well-recompensed but thoroughly illegal employment. The task at hand is the raising of the coastal freighter Guapi in order to salvage its load of cocaine. Their base of operations is the Ceteris Paribus, a huge yacht belonging to Christian's overlord, a Se§or Nu§ez. It's a bad job. Christian won't allow the divers the time or equipment they need to float the ship safely, so they are forced to jury-rig the operation, working for hours at dangerous depths and risking the bends with every dive. Among the many complications are a damsel in great and mortifying distress, mysterious rashes, a Maoist guerrilla connection, menacing islanders, and a suspicious absence of marine life anywhere near the Guapi. And the water tastes funny. Rather rough stuff and nobody's particularly likable, but the technical problems are intriguing and the climate pleasant.