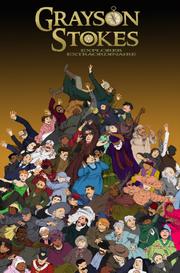 In writer Walker (When the River Rises, 2015, etc.) and illustrator Dunbar’s graphic novel, a 19th-century explorer takes a trip down south—all the way to hell.

Adventure-craving Grayson Stokes has decided that, in 1821, there may be no more land left to discover. Unable to secure funding for an expedition of his own, he meets with a wealthy duchess who wants him to find someone for her. Frederic Bridau has information that she needs, she says, but he’s gone “off the map.” In fact, he’s dead. The duchess possesses the oil of a rare bleeding orchid, which can revive the deceased and also allow Grayson to travel, literally, to hell and back. He eventually agrees to do so, but the duchess has a sinister agenda. Later, after Grayson’s return, she secretly sends one of her operatives to snuff him out. He survives the attempt, but it leads to an inadvertent tragedy, after which Grayson convinces the duchess that he needs further details from Bridau. She allows him to join her forthcoming expedition, with a corpse as cargo. But thwarting the duchess’s nefarious plan and swiping her oil could result in Grayson’s winding up in hell for good. Walker’s exhilarating narrative is brimming with historical references, particularly regarding notable figures; for example, the Marquis de Sade shows up, unsurprisingly in hell’s torture chamber. There are sharp plot twists, as well, regarding one character’s true identity and motivations. The graphic novel’s harrowing interpretation of hell is highlighted by Grayson’s plummet onto a pile of bodies/souls. Dunbar’s illustrations are exceptional for their simplicity, and hell’s stark, barren rooms make the hoofed, horned, bright-red demon minions stand out. There’s even a glimpse of heaven, too, which leads to an inspired bit of comedy. Dynamic secondary characters lend the protagonist support, including Adm. Bridgewater, posing as a stowaway, and financier Lord Turnbull.

An engaging illustrated work that buzzes with action.