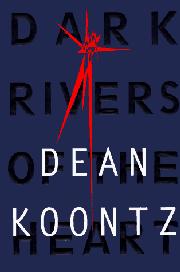 DARK RIVERS OF THE HEART

It is difficult to imagine a reader who won't be hooked by this thriller about government power run amok and a man and woman on the run from the madman who wields that power. Spencer Grant, a mysterious and secretive man tormented by a terrible event in his past, is so taken with a waitress he meets in a Santa Barbara bar one evening that, when she fails to show up for work the next night, he goes to her home to investigate. The place is attacked by a government SWAT team with extremely deadly intent, Grant barely escapes with his life, and he's forced to follow the woman in a desperate flight. The leader of the very secret agency on their trail, Roy Miro, is literally (although not openly) insane, obsessed with perfection and driven to kill wantonly out of a corrupted sense of empathy. Koontz (Mr. Murder, 1993, etc.) skillfully keeps the reader turning the pages. The young woman who is the object of the chase does not make an appearance until halfway through the book, and the reason she is being sought is not revealed until even later. Through most of the story, only Grant knows the dark secret that haunts him and has left him with an identifying scar on his face. An amoral female government agent is added to the mix (her love affair with Miro provides some wickedly funny moments), setting up an unexpected coda to the tale. For good measure, yet another madman takes center stage in time for the inevitable final confrontation. Throughout, the author makes some telling points about government intrusion into privacy and the efficacy of asset-seizure laws. All this, plus lots of startling high-tech computer shenanigans by both sides—and one great dog. Unrelenting excitement, truly memorable characters, and ample food for thought launch this one to almost certain bestsellerdom. (First printing of 500,000; Literary Guild main selection)