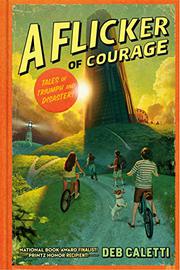 A FLICKER OF COURAGE

From the True Tales of Triumph and Disaster series, volume 1

Four kids fight back against an evil tyrant in this fantasy geared for middle graders from a veteran YA author.

Anxious, lonely Henry lives with his parents next to the raucous, loving Dante family, and he’s long yearned to befriend the family’s oldest son, Apollo. However, it’s only after Apollo’s little brother Rocco is changed into a lizard by Vlad Luxor, their Horrible Ruler with Magic, that Henry gathers his nerve to band together with Apollo and Jo and Pirate Girl, two other kids, to try to find a way to break the spell. Playful names and vocabulary set a fantastical mood, and stylized, vintage-looking drawings and diagrams are peppered throughout. From the start, it’s clear that a familiar epic battle is to be fought between the decent young people and the sinister megalomaniac leader. Luxor is described as a science-denying, thick-fingered, image-obsessed oaf with an inability to spell—a setup that feels heavy-handed even with the abundance of quick-paced action that propels the novel along, which seems destined for a sequel. Most of the characters, including Henry, the Dantes, and Pirate Girl, are white, or at least are assumed to be by default. Jo and her family are South American.

Too-clever details and cloying messages get in the way of this story.