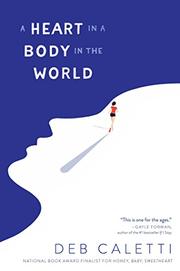 A HEART IN A BODY IN THE WORLD

Annabelle Agnelli runs from Seattle to Washington, D.C., in an attempt to outrun a traumatizing incident that occurred less than a year earlier.

Eighteen-year-old Seattleite Annabelle is hardworking, pretty, and seemingly has it all: good grades, great friends, and a loving family. Following a tragedy, however, Annabelle is wracked with guilt over a crime she did not commit but feels responsible for, and as a result, she suffers from severe anxiety and PTSD. The only thing she feels she can do now is run. Joined by her Italian immigrant grandfather, Grandpa Ed, in his RV and cheered on by a self-appointed publicity team comprising her 13-year-old brother, Malcolm, and her friends Zach (indicated East Asian by his surname) and Olivia (presumed white), Annabelle runs across the nation in an attempt to come to terms with the event perpetrated by a person whom she dubs The Taker. Written in the present tense, Caletti’s (What’s Become of Her, 2017, etc.) narrative conveys a sense of urgency and immediacy as she presents issues familiar to many young women, including rape culture, violence, and the internalization of guilt and social critique.

A timely novel with strong secondary characters that emphasizes the complexities of the heart and doing what is right.