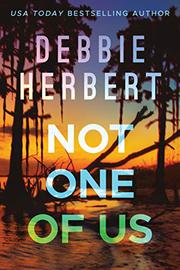 NOT ONE OF US

Herbert moves on from Normal, Alabama, to nearby Enigma, but keeps her unrelenting focus on Southern gothic, family-style.

No sooner has Ray Strickland, just released from prison, returned to Enigma for his mother’s funeral than Jori Trahern, running into him at a local bar, trash-talks him for killing her cousin, Jackson, and a bunch of guys start throwing punches at him and threaten to kill him. Next morning they get their wish when he’s found shot to death in his mother's house. Jori is especially distressed because Ray had denied killing Jackson, because a passing remark by her grandmother reveals that Jackson was actually adopted as a baby, and because a fresh discovery links Ray to the Cormier family, who disappeared without a trace 13 years ago. As the person who entered the Cormier house and found it deserted, dinner still in the oven, shortly before Deacon Cormier was supposed to escort her to their high school prom, Jori has been close to the edge ever since, and caring for her increasingly forgetful grandmother and her brother, Zach, who has severe autism, hasn’t made her life any easier. Flipping between Jori’s viewpoint and that of rookie Eric County investigator Tegan Blackwell, who’s recovering from a troubled childhood of her own, Herbert steadily multiplies acts of violence and betrayal as she knits the new crime closer and closer together with the old. More tellingly, she gradually deepens both heroines’ horror at discovering just how low the people who disparage outsiders and newcomers as “not one of us” are willing to go to preserve their privilege.

Another dispatch from Enigma would be welcome, though it’s hard to see what else Herbert could burn down next time.