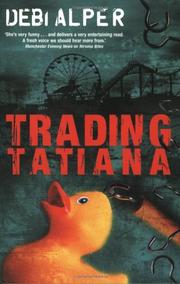 An ex-heroin addict comes to the aid of a sex-trade victim in England.

British author Alper (Nirvana Bites, 2004) presents a quirky, less traditional portrait of contemporary England, as seen from the 20th floor of a grim high-rise in one of London’s seedier neighborhoods. But her story is less slice-of-life, more comic thriller. Her heroine, Jo Cooper, is a former drug addict now piecing her life back together—she makes jewelry, gardens and acts as sales assistant to Smokey Pete, an agoraphobic candle-maker. Jo’s life is an emotional void—almost no friends, no lovers, no past other than drugs. After rescuing a man dangling from a roof, a deed for which she is rewarded with a gift of £500, she treats herself to an outing to Brighton. Along the way she meets Tatiana, a young Ukrainian on the run from thugs who have pressed her into prostitution. Tatiana steals Jo’s money and vanishes, opening Jo’s eyes to the underclass of immigrant women. Later Tatiana resurfaces, beaten up and terrified of going outdoors. When she does, she is chased, but she escapes, demonstrating an impressive range of athletic ability. It turns out that Tatiana is really a one-time circus acrobat named Irina. In an effort to help her, Jo turns to her old drug counselor Mags, who lives in a commune. Mags and her friends install the woman at Smokey Pete’s apartment while plans are made to spirit her out of the country. But before they can leave for Amsterdam, the omnipresent baddies firebomb the place.