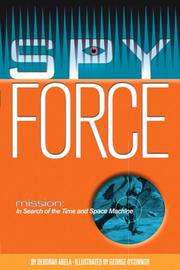 IN SEARCH OF THE TIME AND SPACE MACHINE

Real and imaginary worlds unexpectedly leak into each other in this Spy Kids-style import. Shuffled off by busy divorced parents to her Uncle Ben’s farm, 11-year-old urbanite Maxine behaves badly—that is, when she’s not penning cliffhanging adventures for made-up Spy Force super-agent Alex Crane. But her attitude changes radically when she learns that Ben is a renowned scientist with a prototype Matter Transporter out in the shed. Enlisting young farmhand Linden as her sidekick, Max immediately fires up the Transporter for a trip to London, in hopes of bringing Ben and his estranged but equally brilliant brother Francis back together. There the plot thickens when she falls afoul of sinister double agent Mr. Blue, who’s out to sell Francis’s Time and Space Machine to the highest bidder. Amid a welter of high-tech gadgets, typical preteen tropes, repeated dunks into various forms of slime and not-too-perilous perils, Max accomplishes her mission, leaving Mr. Blue foiled but alive for sequels—then receives a letter of commendation from the supposedly invented Spy Force! This provocative twist closes a promising start for a notably hot-tempered, occasionally vulnerable heroine. (Fiction. 10-12)