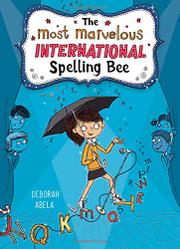 THE MOST MARVELOUS INTERNATIONAL SPELLING BEE

India Wimple, Australia’s champion speller, has returned home from her victory at the Stupendously Spectacular Spelling Bee in Sydney. Now that the mayor has awarded her the Yungabilla Medallion and giant plastic zucchini in commemoration of her feat, she just wants to get back to her quiet life. But then a letter arrives: an invitation to the Most Marvelous International Spelling Bee! Soon, the Wimples are off to London, where a mystery arises when a saboteur strikes. India is on the case, joined once again by her sweet and kooky family and pals Rajish and Summer, Australia’s other two top spellers. New competitors-turned-friends include bullied English boy Peter and a neglected Canadian girl named Holly, both of whom are looking for acceptance. Absurd humor abounds: When the contestants and their parents meet the queen, Holly’s fitness-guru parents try to sell her their Beaut Butts and Guts exercise program; the Wimples can’t understand why no-nonsense Nanna Flo keeps giggling (she’s smitten with Peter’s grandfather); and the bee’s special guest is the only three-time world champion, a grown man resembling Liberace. Combine this with Bitskoff’s spot cartoons and lots of vocabulary that will be new to many young readers, and much merriment and edification mark this story of bravery, friendship, and logophilia. The cast is primarily white or assumed white; Indian-Australian Rajish and his family are notable exceptions.

Another round of laughs.