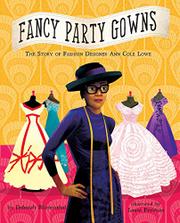 Society ladies and screen actresses made Ann Cole Lowe’s gowns famous, but no one credited their African-American designer.

The great-granddaughter of a slave, Ann grew up in Alabama sewing with her mother. When she was just 16, her mother died, but Ann kept on with the work, finishing a gown for the wife of the governor. She was able to attend design school in New York City in 1917, albeit sitting alone in a segregated classroom. As the proprietor of her own business, Ann was in much demand with very wealthy and high-profile women. Olivia de Havilland accepted her 1947 Oscar wearing an Ann Cole Lowe gown. In 1953, a rich socialite named Jaqueline Bouvier married a Massachusetts senator named John F. Kennedy wearing one of Lowe’s couture creations. Lowe worked hard and eventually began to receive long-overdue recognition. Freeman’s crisply colorful artwork enlivens the clear and accessible narration. The endpapers featuring pictures of Lowe’s runway-perfect gowns and fabric swatches in the page design will delight young fashionistas, while the vignette of Ann in a classroom sitting by herself against a solid white background speaks volumes.

Kudos to a title that recognizes a previously uncelebrated African-American woman of achievement.