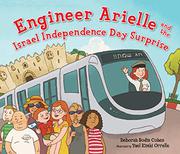 Redheaded, white Arielle happily gets ready for her workday because it is a very special day: Yom Ha’Atzma’ut, Israel’s birthday or Independence Day. Her brother Ezra is also getting ready to go to work. Arielle rides her scooter through the colorful streets of Jerusalem and thinks about her great-great-grandfather Ari, who was a conductor on a train from Tel Aviv to Jerusalem over 100 years ago—and who celebrated Passover in Cohen’s Engineer Ari and the Passover Rush (2015) and Sukkot in Engineer Ari and the Sukkah Express (2010), both illustrated by Shahar Kober. Arielle drives a very modern train, but before she starts out, she tapes a poster to the roof of the front car. Many people board the trains, including Arielle’s friends, who want her to join in their activities, but she is going to celebrate with her brother. The train makes many stops in Jerusalem, and Arielle finally sees her brother flying overhead with the Israeli Air Force in planes that spell out “Israel” in their contrails. From his cockpit, Ezra can read the message that his sister has placed on the train—and it is no surprise on this holiday. Orrelle’s bright and splashy art depicts a bevy of happy folk of a variety of skin colors.

All is happy and peaceful on this springtime Israeli holiday.