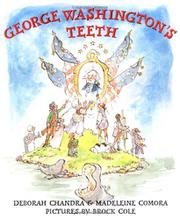 Now It Can Be Told: that severe, square-jawed look that the Father of Our Country flashes in his portraits reveals not only strength of character, but also his struggle to hide the fact that he was nearly (entirely, later in life) toothless by keeping a succession of spring-loaded false teeth in place. Drawing information from Washington’s own writings, the authors deliver a double account of his dental tribulations: first in sprightly rhyme—Martha “fed him mush and pickled tripe, / But when guests came to dine, / He sneaked one of his favorite nuts. / Then he had only nine”—followed by a detailed, annotated timeline. Cole’s (Larky Mavis, 2001, etc.) freely drawn, rumpled-looking watercolors document the countdown as well, with scenes of the unhappy statesman at war and at home, surrounded by family, attendants (including dark-skinned ones), and would-be dentists, all in authentic 18th-century dress. Contrary to popular belief, Washington’s false teeth were made not of wood, but of real teeth and hippo ivory; a photo of his last set closes this breezy, sympathetic, carefully-researched vignette on a note that will have readers feeling the great man’s pain—and never looking at his painted visage the same way again. (source notes) (Picture book/nonfiction. 7-9)