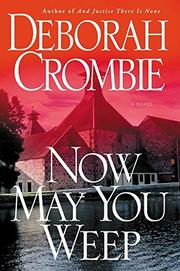 NOW MAY YOU WEEP

Detective Inspector Gemma James (And Justice There Is None, 2002, etc.) is cast in some unaccustomed roles—dupe and murder suspect—when she goes to Scotland for a cooking class.

Gemma doesn’t know what’s really cooking. Her friend and former landlady, psychologist Hazel Cavendish, is less interested in picking up culinary expertise from chef John Innes than in rekindling her ancient romance with local distiller Donald Brodie. Not even Hazel knows that Donald’s also being pursued by shopgirl Alison Grant, who’s pursued in turn (in a neat completion of Crombie’s social stratification) by stable owner Callum MacGillivray. The situation is obviously explosive, and when John is killed, the only surprise is that it took so long. As the suspects stand around pointing their fingers at each other—at one point somebody suggests they must all be in it together—DCI Alun Ross gets pointedly interested in Hazel, and even in Hazel’s husband Tim, who seemed to be safely tucked away back in London. Meanwhile, Gemma’s lover and housemate, Supt. Duncan Kincaid, is threatened with the loss of his late wife’s son in a custody suit. For good measure, there’s also a series of flashbacks to a pivotal episode in the distillery’s history a hundred years ago.

The atmosphere is rich and peaty, but the pace is glacial—nearly another century passes before the plot begins to thicken—and neither Gemma nor Kincaid shines as a detective this time.