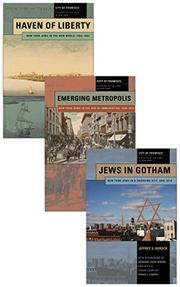 A History of the Jews in New York

This ambitious three-volume history, overseen by Moore (Judaic Studies and History/Univ. of Michigan; American Jewish Identity Politics, 2008, etc.), provides a lively, much-needed overview of the role that Jews have played in the history and success of the Big Apple, helping to transform it into “a city of promises, some fulfilled, some pending, some beckoning new generations.”

The first volume, Haven of Liberty: New York Jews in the New World, 1654-1865, by Rock (History/Florida International Univ.; Cityscapes, 2001, etc.), traces the history of New York Jews back to the first Dutch Jews who settled in the New Amsterdam colony in the mid-17th century, where they fought for the rights to own real estate and run businesses. As the years went by, Jewish-owned businesses prospered despite widespread anti-Semitism, as the city as a whole grew into an economic powerhouse. The volume also covers the rise of Reform Judaism and, later, disputes within the community regarding slavery. In Emerging Metropolis, New York Jews in the Age of Immigration, 1840-1920, Polland, the vice president of education for the Lower East Side Tenement Museum (Landmark of the Spirit: The Eldridge Street Synagogue, 2008), and Soyer (History/Fordham Univ.) show how the influx of immigrant Jews from Europe changed the city, as Jewish organizations proliferated and the community began to make itself felt in city politics, journalism and the arts. In the third volume, Jews in Gotham: New York Jews in a Changing City, 1920-2010, Gurock (Jewish History/Yeshiva Univ.; Orthodox Jews in America, 2009, etc.) examines a range of engaging issues, including the community’s growth in Queens and suburbia, crises such as the 1991 Crown Heights riot, and Jewish feminism. Each volume also includes a vibrant photo- and illustration-packed “visual essay” by art historian Linden, which ably supplements and enriches the text.

Such a large historical project could have easily descended into tedious and dry academia, but instead, all three volumes are briskly paced, well-researched and insightful. Aficionados of urban histories, in particular, will find much to enjoy.