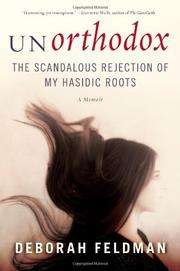 The Scandalous Rejection of My Hasidic Roots

A young woman’s coming-of-age and escape from a sect of Hasidic Judaism.

In her debut memoir, Feldman recounts the many struggles endured while growing up within a particularly orthodox branch of Hasidic Judaism. The daughter of mentally unstable parents, the author was raised by her Hasidic grandparents, whose allegiance to their religious and cultural traditions often proved problematic for the young Feldman. Cloistered from the secular world, the author’s pinhole-sized view of New York kept her at a continual disadvantage, providing a singular narrative for understanding the world beyond her neighborhood. As she matured, Feldman became more aware of the inner turmoil “brewing madly between my own thoughts and the teachings I was absorbing.” As she continued to question her faith, she soon recognized the tyrannical aspects of the traditions, the culmination of which led to an arranged marriage for her and another young Hasid, Eli. Despite the sect’s blessing, the marriage soon faltered, primarily due to sexual problems spurred by an utter lack of knowledge by both partners. The Hasidic community’s uncompromising insularity rendered the young couple woefully unprepared for their relationship, as well as the parental responsibilities that followed soon after. After Eli continued to place his strict observance of Judaic tradition above the health of his pregnant wife, Feldman acknowledged her own unimportance in their relationship. Having endured her second-class citizenship long enough, she took her child and fled to the outside world, basking in her newfound liberty. It was a bold move, but Feldman doesn’t fully capture the significance of her departure.