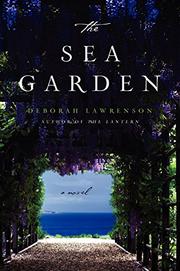 In three loosely connected novellas, Lawrenson (The Lantern, 2011) has created a tale of love and mystery with shifting characters, eras, locations and tones.

Award-winning landscape designer Ellie Brooke is on a ferry to Porquerolles, a French Mediterranean island, when a young man goes overboard in an apparent suicide. That event sets the tone for her brief 2013 visit. Ellie has been asked to restore a memorial garden, but she's gripped with foreboding as a mysterious man appears and disappears and nightmares invade her sleep. Forced to stay the night at her host’s estate, she meets the garden’s owner, a crazy old woman; decides to reject the job; then unwisely returns the next day to retrieve a lost item. Years earlier, during the closing months of World War II, 20-ish blind woman Marthe Lincel lives with the Musset family and works in their perfume and soap refinery. The Nazis have occupied Provence, but the Musset family is allowed to continue production. Although many consider them Nazi sympathizers, they actually serve in the Resistance. Putting her Braille expertise to use, Marthe joins the movement, and when a key member fails to return from a mission, Marthe volunteers to replace her. Her courageous actions—and a chance meeting with an American soldier the Musset family is trying to move out of the country—change her future. Also participating in the war effort, Iris Nightingale is a junior intelligence officer in London who finds herself in close contact with operatives flying into and out of France. She becomes romantically involved with Frenchman Xavier Descours, who then goes on a mission and never returns. Obsessed with uncovering information about his life and fate, Iris searches for answers and, years later, discovers the truth.

Readers who wade through the slowly paced narrative may appreciate its rich historical detail and lavish descriptions of the French coastline, but the revelations that weave the three stories together are anticlimactic and disappointing.