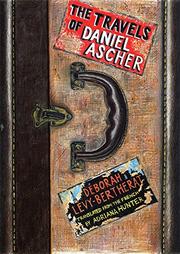 THE TRAVELS OF DANIEL ASCHER

Lévy-Bertherat’s debut novel is a story about storytelling—both historical and personal.

Hélène arrives in Paris in 1999 to study archaeology. She befriends a group of students, including Guillaume, a whimsical man who adores the work of H.R. Sanders, a beloved author of young-adult adventures. “H.R. Sanders” is actually the pen name of Daniel Roche, Hélène’s great-uncle, in whose Paris apartment she happens to be staying. The plot becomes more tangled when Hélène and Guillaume begin investigating Daniel’s past, including the time before he was adopted into Hélène’s family, when he was a young Jewish man in Paris during the Nazi occupation. In examining her great-uncle’s history, Hélène finds herself rereading his books; she’d never before seen the magic in them, but soon she finds herself devouring them with renewed interest, even as she approaches the kind of adventure found in their pages. The best moments in Lévy-Bertherat’s short novel involve people falling into stories, whether it’s Hélène almost missing her train stop due to an engrossing chapter or characters constructing personal histories for themselves in order to hide—or perhaps to heal—past traumas. But for a novel that focuses on the excitement of storytelling, there's little excitement here. Never does one get the sense that Hélène is in any sort of danger. She simply wanders from location to location, talking to people with ease, without the author ever developing a clear sense of the stakes. The writing is lovely, yes, but the novel suffers from not deciding what it wants to be: it neither excites enough to be great young-adult fiction nor does it dig deeply enough to be a compelling novel of ideas.