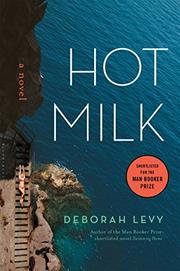 Kinship, gender, Medusas—this rich new novel from a highly regarded British writer dazzles and teases with its many connections while exposing the double-edged sword of mother-daughter love.

Levy’s (Things I Didn’t Want to Know, 2014, etc.) latest work may read lightly but is in fact a closely woven fabric of allusions, verbal riffs, and cross-references reflecting the experiences and dilemmas of its narrator, Sofia Papastergiadis, born in Britain to an English mother, Rose, and a Greek father she hasn’t seen in 11 years. Now 25, with a degree in anthropology, Sofia is living an empty, frustrated life since she abandoned her doctoral thesis to take care of Rose, whose many ailments include strange pains and mysteriously paralyzed lower limbs. The story opens in Almeria, Spain, where, at considerable expense, mother and daughter have gone to visit the Gómez Clinic in hopes of a cure for Rose. But is Rose really ill or a hypochondriac? Is Gómez a quack or a brilliant healer? Is Sofia a monster, as she and others refer to her, or a sexual powerhouse—as she begins to seem after acting on Dr. Gómez’s recommendation that she become bolder by taking two lovers, one male and one female. Levy’s wit and fluency render her quicksilver, sometimes surreal narrative simultaneously farcical and fascinating. The new, bolder Sofia may act more decisively—freeing an abused dog, stealing a fish, visiting her father and his new family in Athens—but underneath she’s lost and lonely, afraid of “failing and falling and feeling.” Yet her need for a “bigger life” cannot be suppressed, leading to one final act of boldness that disrupts—though doesn’t necessarily sever—those tendrillike bonds holding her captive.