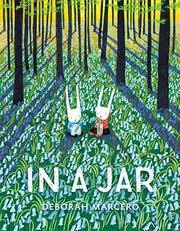 Two rabbits collect shared memories in jars—visualizations of intangible moments that build their friendship and help sustain it when one moves away.

Llewellyn is a collector of rocks and feathers and other mundane items until he meets Evelyn. Together they experience a sensational sunset, which he scoops into a jar for her. The memory of that event softly glows like a night light in its jar, bringing warmth and comfort to her as she sleeps. The bunnies’ jars soon become filled with experiential wonders: snowball fights and hot cocoa, exploring tulip-filled fields and playing until their shadows grow long at dusk. After Evelyn moves, it takes a glittering meteor shower for Llewelyn to realize the jars might allow them to continue to share their lives with each other. The illustrations feature simple, cartoonlike characters. But while the drawing style may be simplified, sophisticated patterning and color design, as well as intricate pen work, create a lush and detailed world. The artist moves between small inserted panels and large spreads to great effect, creating whimsical and uplifting art that perfectly matches the text. In the art, Marcero builds a visual vocabulary for the meaning and importance of memories. As Evelyn opens a jar and stars from Llewelyn’s night sky swirl and fall around her, readers will feel the warmth of friendship and the wonder of the world as well.