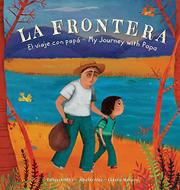 Co-authors Mills and Alva demystify la frontera in this autobiographical tale based on Alva’s childhood journey with his father from Mexico to Texas.

To provide for his growing family, Alfredo’s father decides to journey northward to “find a new home.” Alfredo joins his papá on this arduous voyage, knowing he’ll miss his family and his small village. After saying goodbye to his home and loved ones, Alfredo sets off in the early morning light alongside his father. Led to the Rio Grande by el coyote, Papa and Alfredo cross the river with the help of an old inner tube. When el coyote abandons Alfredo and his father, the pair must escape further into the harsh Texan landscape, away from la frontera. Presented in both Spanish and English, the retrospective narrative overflows with grueling, poignant details about the journey Alfredo and his father undertook. Yet Navarro’s mixed-media artwork succeeds in emphasizing the more-hopeful aspects of Alva’s story, namely love and strength in a familial context. Vivid shifts in color, light, and shadows from scene to scene gently pull readers along, complemented by powerful facial expressions during key moments. After almost a week of struggles, Alfredo and his father arrive at “the Embassy,” a makeshift camp behind a factory. As father and son adjust to their new life in the U.S., they never forget about those left behind.