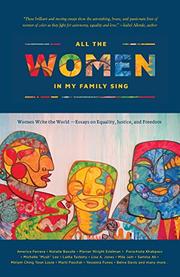 ALL THE WOMEN IN MY FAMILY SING

Women Write the World: Essays on Equality, Justice, and Freedom

Essays by women of color offer intimate, candid reflections on their lives.

Santana gathers an articulate, often moving collection of essays focused on cultural and gender identity, the meaning of home, work experiences, social justice, family and friendship, beauty, sexuality, illness, and journeys. Many of the contributors are Californians, either by birth or adoption, and reflect on their affinity for—or estrangement from—the communities in which they live, work, and raise their children. Brief biographies follow each essay, summarizing the writer’s accomplishments; still, despite achievements as writers, educators, and activists, most are likely to be unfamiliar to general readers. Among the recognizable names are actress America Ferrera, represented by an excerpt from her speech at the Women’s March in Washington on Jan. 21, 2017; Marian Wright Edelman, founder and president of the Children’s Defense Fund, who celebrates the “great heritage of strength, courage, faith and belief” demonstrated by social reformers; Emmy Award–winning newscaster Belva Davis, whose essay takes the form of a letter to her granddaughter, urging her “to move through life with no barriers”; and novelist Natalie Baszile, who writes of her connection to Louisiana, where her father grew up. Fulbright scholar Ethel Morgan Smith writes about her friendship with the daughter of a Holocaust survivor, a relationship that foundered over Smith’s respect for Barack Obama and Angela Davis. Exasperated, Smith told her friend “she didn’t own all of the pain in history.” Pain is a recurring theme in essays that consider racism, xenophobia, and inequality. Black Latina Nuris Terrero reveals the challenges she faced as a single mother determined to break the cycle of violence that blighted her own family. Art historian Terezita Romo speaks to the need for “inclusive American art” in museums. “There are some moments in history,” essayist Hope Wabuke asserts, when writers “have a responsibility to look. To bear witness.” Other contributors include Jennifer De Leon, V.V. Ganeshananthan, and Porochista Khakpour.