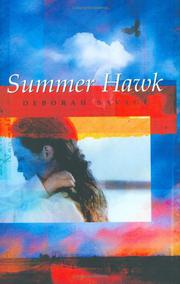 From Savage (Under a Different Sky, 1997, etc.), a slow, clichÇd novel about a smart, sophisticated, ambitious teenager stuck in a small town while her future looms large; the rescue of hawks is the excuse for some overwrought allusions to flight and freedom. Taylor has just finished the ninth grade in Hunter’s Gap. She doesn’t fit in with the stereotypical small-minded, small-town types, and she misses her (also stereotypical) workaholic mother, who spends most of her time in the city or traveling to conferences. Taylor feels that her sensitive-artist (another stereotype) father is the only person who understands her until she connects with the class outcast, Rail, and Rhiannon, the “hawk lady” who runs the local raptor rescue center. Predictably, Taylor starts to see the real people behind the stereotypes, and trades in her future at the upscale Porter Phelps school for an internship at the local paper. Along the way, her father sleeps with Rhiannon, who sees in Taylor her daughter, who died; Taylor first worships Rhiannon (“I created a secret world in my heart—a high, windy hill where I stood side by side with the hawk lady, our long hair blowing until it mingled together”), then despises her; Taylor also has mixed feelings for Rail, the hick with the heart of gold. Hard-edged Rhiannon’s supposed charisma never comes through, and it’s easy to dislike Taylor, who, between bouts of self-pity, snaps at the very decent Rail in every chapter. (Fiction. 12-14)