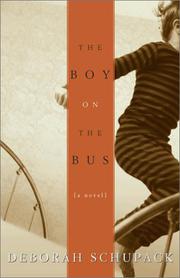 THE BOY ON THE BUS

A mother can’t understand why the young boy in her house no longer seems like her son—and with this unexpectedly impressive debut novel of psychological mystery, Schupack boldly announces her presence at the table of writers who deserve to be heard.

In a small Vermont town, Meg Landry is a stay-at-home mother whose husband, Jeff, is working out of town more often than not and emotionally MIA even when he’s around. A painter who’s mostly given up, Meg is simply facing the ennui of life with Charlie, her asthmatic eight-year-old. Then one afternoon she’s called out to the school bus to deal with the small boy sitting in back who by all rights should be Charlie, but, as far as Meg can tell, is not. After a long, tense period, Meg walks off the bus and back to her house with the child who seems to be her son but at the same time is vastly different. Jeff is summoned back home from his worksite in Canada, whereupon he commences to pace, find things to fix, and declare that he’s pretty sure that boy is Charlie. Even Katie, Meg’s angry teenager back from boarding school, who is at first casually dismissive of her little brother, eventually becomes scared by this short stranger who doesn’t seem to know anything about their family or himself and who chills them all with his preternatural calm. Schupack wisely avoids the Children of the Damned route and resists the urge to focus too much on the boy—or the question of who or what he might be—and pays attention instead to the fragile mental health of Meg, a bored housewife uncomfortable in her own skin.

Etched with clear prose that recalls Doris Lessing at her most haunting. An astounding and horrific first novel.