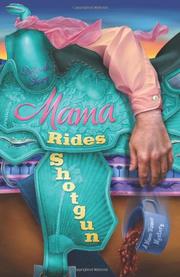 A family trip to the Florida Cracker Trail to honor the past becomes a hunt for a clever murderer.

Mace Bauer and her much-married Mama head off on horseback as part of a large group following the trail cowboys once used to move cattle to market. When Mace and Mama stumble upon the body of wealthy rancher Lawton Bramble, who’s provided land for an overnight stop, Doc Abel proclaims it a heart attack, but Mace has a feeling it may have been poison in the chili he was brewing. Lawton’s much younger wife Wynonna puts on a pretty good show of grief; his daughter Belle appears devastated; and his son Trey stays drunk. Though Trey was Mace’s high-school crush, her heart still belongs to Miami Detective Carlos Martinez, who returned to Miami after the case in which Mace’s Mama was chief suspect (Mama Does Time, 2008). Mace’s life goes into overdrive when her sisters, Maddie and Marty, Mama’s fiancé, Sal, and Carlos all join the trail ride. Trey becomes amorous, his ex-fiancée Austin enraged and Carlos jealous. The obligatory pranks escalate from a ripped tent to a rattlesnake to a runaway horse. Mace maintains her tough shell even though Mama advises her to be more of a clinging vine to win back Carlos. Both of them, however, are more interested in catching a murderer before Mace becomes another victim.

Stephanie Plum goes into the backwoods in an amusingly wild ride through parts of Florida tourists rarely visit.