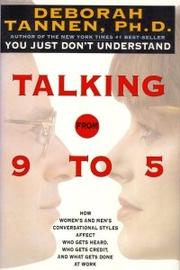 How Women's and Men's Conversational Styles Affect Who Gets Heard, Who Gets Credit, and What Gets Done at Work

The workplace (primarily the office) is the setting for this third volume of Tannen's Linguistics Lite trilogy. Tannen (Sociolinguistics/Georgetown) sticks close to the main idea she popularized almost a decade ago in That's Not What I Meant (1985): Men and women have different conversational styles that are equally valid (though unequally valued). Here, she describes women's disadvantages in the workplace: They are paid less than men for the same work and face ``sexism'' (a term Tannen keeps dubiously between quotation marks), a glass ceiling, and sexual harassment. Why do such problems persist? Tannen considers the difference in male and female conversational style as a primary cause. Women are likely to have an indirect manner, to apologize more, and to offer softer criticism; they're problem preventers instead of heroic crisis solvers; they generally strive for the appearance of equality with, not superiority to, their co-workers. Many (male) bosses overlook the value of this style. Tannen concludes that women should go with their own approach, but they should also try to be assertive and worry less about being liked than about being competent. Yet in the next breath, she acknowledges that women who act assertive may bring unpleasant consequences on themselves. In the end, she reaches for platitudes, blithely recommending that workers adopt a mix of styles and that managers learn to recognize and appreciate quality in diverse forms. She says ``on that happy day, the glass ceiling will become a looking glass through which a fair percentage of Alices will be able to step.'' Readers of her earlier books will find much that is familiar, from the research to the conclusions. Women facing a hostile work environment and seeking substantive improvements in their situation are likely to find that Tannen's recourse to ``stylistic differences'' ultimately offers little help. (First printing of 200,000; first serial to New York Times Magazine and Redbook; Book-of-the-Month Club alternate selection; Quality Paperback Book Club main selection; Fortune Book Club main selection; author tour)