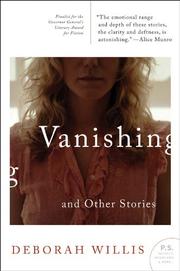 VANISHING AND OTHER STORIES

The well-made, mostly downbeat stories in Canadian writer Willis’s debut collection feature characters with an intimate understanding of loss—loss past, loss present, even the losses to come.

In the title story, a daughter struggles to come to grips with the disappearance of her father, a writer—but the detective work here is to plumb the ultimately unsolvable mysteries of mind and motive. “Escape” features a formerly stolid and reliable doctor who, after his wife’s untimely death, first takes up nocturnal trips to the casino and then a not-quite-innocent-but-not-quite-sinister obsession with a female blackjack dealer who was once a sleight-of-hand artist. “Caught” recounts a dalliance between a female ichthyologist and one of her undergraduate students. Willis tells the story in the subjunctive mood, speculating, switching perspectives, blurring details: “There’s more than one way it could go,” she begins. “Outside the office there might be the shuffle of shoes on waxed floor…” In less steady hands this might feel gimmicky or showy, but Willis employs the technique with great patience and deftness, thwarting again and again the reader’s desire to find a safe and stable place to make judgments—that’s not, she delicately insists, the point. Several stories, notably “Sky Theatre” and “The Separation,” anatomize the complexities and pleasures of female friendship. The former ends with a fleeting, beautifully realized moment of connection between two high-school girls, the narrator and the class beauty who’s now confined to a wheelchair; the latter explores the fraught relationship between two young sisters traveling back and forth by bus to visit their father during a marital separation.

Willis’s style is resolutely unflashy, and she doesn’t show much range of tone and mood, but this is a remarkably mature, self-assured debut by a writer whose work will draw comparisons to Alice Munro and Mavis Gallant.