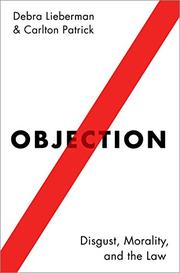 Disgust, Morality, and the Law

by Debra Lieberman and Carlton Patrick

A debut psychological study that asserts that our instinctual aversion to disgusting biological phenomena also shapes our ideas about legal and political issues—with dysfunctional consequences.

Lieberman (Psychology/Univ. of Miami) and Patrick (Law/Univ. of Central Florida) link together the universal human revulsion at things such as rotting food and diseased flesh with our sense of moral conviction, particularly regarding different types of sexual behavior. They trace this notion back to a genetically programmed disgust reflex that makes humans avoid things that harbor disease-causing microbes, such as bad-smelling, bad-tasting, maggoty food or animals with blotchy skin or open sores. They argue that people also adapt these emotions to judge prospective mating partners: One feels an aversion to sex with those who look unhealthy or too old or young to be fertile or with family members, because mating with close relatives confers a high risk of genetic abnormalities. The Darwinian survival mechanism of disgust, they contend, also lends itself to social bonding: When one paints marginalized individuals or groups as disgusting, it’s easier to convince others to help expel or exploit them. This plays out in politics, when officials apply metaphors that elicit disgust to racial minorities or gay people, and in criminal cases, when prosecutors label defendants with terms such as “scum” or “filth” or display gruesome crime scene photos. The authors make a cogent plea to eliminate such visceral feelings from law and policy in favor of more rational, tolerant principles: “If we are going to claim a moral high ground,” they write, “it will not be built atop disgust.” They illustrate this by examining the inconsistent rationales for banning various taboo sexual practices. Lieberman and Patrick draw on a wealth of research to make their case; for example, they note that putting test subjects in a room that has an unpleasant odor causes them to make harsher moral judgments. They also convey it all in lucid, readable prose. The result is an occasionally gross but always engrossing account of how the mind cobbles together seemingly self-evident attitudes out of repurposed, subconscious mental processes.

A stimulating treatise on how lofty ideals can grow from primitive, unreliable urges.