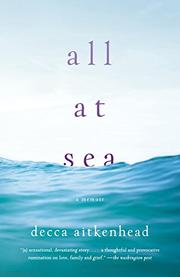 An award-winning journalist’s account of how she came to terms with the accidental drowning death of her beloved companion and father of her two children.

When Aitkenhead met Tony, she was a successful writer for the Guardian who had grown up with two bohemian parents. He was a charming mixed-race crack addict who “wholesaled cocaine for a living” and smelled of “designer cologne and cannabis.” Both were married, but in time, they developed a powerful attraction to each other and left their respective spouses to become “the most implausible couple I had ever known.” Their challenging but ultimately happy union came to a tragic end 10 years later on a beach in Jamaica where Tony died trying to save their small son from drowning. Aitkenhead remembers her partner—who defied all stereotypes of a street-hustling gangster—with deep affection. “Although a criminal, he was trustworthy and surprisingly guileless,” she writes, and had a “deep hippy streak” that manifested in a love of camping, cooking, and children. A few years into their relationship, the author discovered that she was pregnant and left Tony out of fear for what his crack habit would do to their child. Unwilling to lose her, Tony immediately joined a Cocaine Anonymous group and ended all crack use. He embraced his role as father and later as a charity worker who helped “desperately dispossessed children” from dysfunctional households. With Aitkenhead’s encouragement, Tony went to college and earned a degree in psychology and criminology. That she and her partner were able to learn from each other and work through their race and class differences to form a cohesive family unit makes the book memorable. But in the end, it is the author’s resilience after her lover’s death—which she describes with poised eloquence—that renders the narrative especially satisfying.

An unsentimental yet affecting memoir.