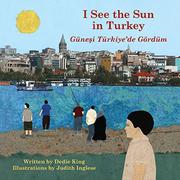 I SEE THE SUN IN TURKEY

From the I See the Sun… series

Turkey’s political situation is often in the news, but this book focuses mostly on the everyday life of a young child in Istanbul.

The English text is in a clear, Roman typeface, with alternating Turkish paragraphs set in italics. The story is bookended by morning and evening calls to prayer, when Mehmet, about 6, remarks on how the light falls on the mosque minarets at each time of day. The family is not shown praying, however, and Mehmet attends a coed secular school. “Some of Mama’s friends wear headscarves. Mama doesn’t. She says there are many paths to Allah.” The day’s highlight is a fishing trip with his brother and father. Mehmet notices “a boy my size with his mother.” They are not speaking Turkish, and the child “looks sad and hungry.” A contemporary issue creeps into the text as Mehmet’s father explains “that there are many refugees here in Istanbul.” Mehmet generously gives the boy his fishing rod. Later, Mehmet goes roller-skating at the plaza surrounding a neighborhood mosque and watches a soccer game on TV. An afterword for older readers provides some historical facts and explanations about figures mentioned in the text such as Rumi and Atatürk. Adult readers not familiar with Turkish history may wish this had been integrated directly into the text. The collages place rather static human figures assembled from cut paper and with drawn-on details into photographic backgrounds that give a sense of depth and place.

Emphasizing daily commonalities, this is a useful book on urban Turkish culture.