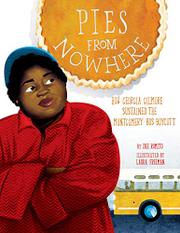 Despite significant danger to themselves, Georgia Gilmore and the Club from Nowhere raised support for the Montgomery bus boycott.

Georgia Gilmore was an excellent cook and baker. The third-person narrator explains that when Rosa Parks was jailed, Georgia had already been boycotting the Montgomery buses (due to mistreatment from drivers) for two months. Tired of injustice, when the citywide boycott began, Georgia wanted to support the cause. So she made use of her remarkable culinary skills: Along with other women, she cooked and baked, donating their sales to the cause. To avoid retribution, the proceeds were donated anonymously. The boycott is explained simply—even children with no prior knowledge of segregation or the civil rights movement will be able to follow the story with little exposition. Though Georgia eventually faced retaliation, she remained true to her beliefs and became an entrepreneur, creating a safe meeting space for civil rights leaders. The text placement sometimes feels clunky, and some of the single-page spreads can feel confusing in juxtaposition (though the art is otherwise well-executed). Despite these minor flaws, the message that, like Georgia, everyone can find a place in the fight for social justice is clear. Pair with Monica Clark-Robinson and Frank Morrison’s Let the Children March (2017) and Olugbemisola Rhuday-Perkovich and Jade Johnson’s Someday Is Now (2017) or other titles that highlight lesser-known figures for a fuller understanding of the civil rights movement.