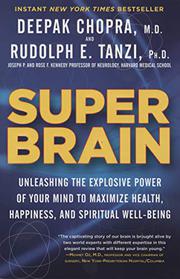 Unleashing the Explosive Power of Your Mind to Maximize Health, Happiness, and Spiritual Well-Being

A mixture of recent research in the neurosciences and spiritual wisdom passed down through generations.

With his dozens of best-selling books, Chopra (co-author: War of the Worldviews: Science vs. Spirituality, 2011, etc.) has arguably done more than anyone to bring Eastern spirituality and healing practices to the West. His oeuvre brings to mind an inebriated dart player in a tavern—many attempts go wild, but when he connects, you're convinced he's a natural. This book, co-authored with Alzheimer’s Genome Project head Tanzi (Neurology/Harvard Medical School; co-author: Decoding Darkness: The Search for the Genetic Causes of Alzheimer's Disease, 2001, etc.), continues the trend of laying Eastern thought over Western science. This "tag team" author approach lends credibility to the less scientifically rigorous ideas Chopra has to offer, but with varying degrees of success. The plasticity of the young brain and the rate at which new synapse connections are made in children; the importance of regular physical activity and exercise; the idea that instincts and emotions are integral and necessary to social relations—these scientific propositions, as they're laid out, won’t strike readers as either controversial or revolutionary. The authors theorize about connections between neuroscience and long-held beliefs about the mind, and many of these connections don’t require a leap of faith to accept as valid hypotheses. The lion's share of the text, however, consists of platitudes and value judgments about happiness and success that can't really be held forth as a prescription for the "next leap in the human brain's evolution." Examples include such statements as, "Mind, not the brain, is the origin of consciousness," and the suggestions that an abused wife should “stop exposing herself to stresses that occur over and over.”

For Chopra fans only—as such, likely to become a best-seller.