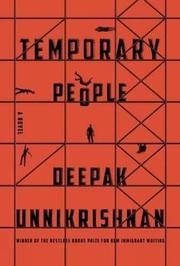 Guest workers of the United Arab Emirates embody multiple worlds and identities and long for home in a fantastical debut work of fiction, winner of the inaugural Restless Books Prize for New Immigrant Writing.

In 28 engrossing linked stories, Unnikrishnan blends Malayalam, Arabic, and English slang as well as South Asian and Persian Gulf cultures to capture the disjunction and dissociation of temporary foreign workers who live in the Arabian Peninsula but will never receive citizenship. In “Gulf Return,” a laborer swallows his passport and turns into a passport, and his roommate swallows a suitcase and turns into a suitcase so that their third friend can dash away with them both to the airport. In “Birds,” Anna Varghese tapes construction workers who fall from tall buildings back together. “Anna had a superb track record for finding fallen men….She found everything, including teeth, bits of skin.” The tongue of an English-speaking teen escapes from his mouth, shedding words with every step in the agile “Glossary.” “Verbs, adjectives, and adverbs died at the scene but the surviving nouns, tadpole-sized, see-through, fell like hail.” A lonely renegade cockroach called The General mimics humanlike qualities in the ingenious “Blatella Germanica.” “It was when he started picking up the language of the building’s tenants, bits of Arabic from the Palestinians and the Sudanese, Tagalog from the Filipinos, modern variations of Dravidian languages, that he began crafting a custom-made patois from the many tongues he heard, then practicing it at night in the kitchen, as he foraged walking on two legs and in costume, that he startled the other Germanicas in his community, and they ostracized him.” The author’s crisp, imaginative prose packs a punch, and his whimsical depiction of characters who oscillate between two lands on either side of the Arabian Sea unspools the kind of immigrant narratives that are rarely told.

An enchanting, unparalleled anthem of displacement and repatriation.