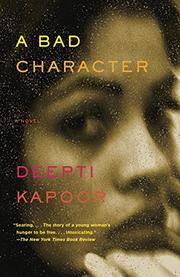 The meeting between a restless young woman and a manipulative, worldly man in Delhi ignites a volatile, ill-fated love story, delivered with histrionic touches by debut Indian writer Kapoor.

“The world keeps turning, but no one knows what turns in me,” reports the nameless female narrator of this short, overheated first novel, who opens with the announcement that her lover died when she was 21. Looking back 10 years later, the woman records her awkward early years, her mother’s death when she was 17, her beloved father’s abandonment of her, her relocation to Delhi to live with Aunty and attend college. There, she meets a man in a cafe. “I am pretty and he is ugly. And the secret is this turns me on.” Ugly he may be, and a liar too, it emerges, but the man knows Delhi inside out, has wealth, confidence and a wild streak, and woos her slowly but thoroughly. When the sex eventually begins, it’s intense and he’s in control. Kapoor boosts her slender coming-of-age story with flashes of Delhi in 2000, a place of economic ferment in some quarters, while elsewhere, the teeming centuries-old ways continue. Men’s predatory glances—and actions—are all around. Consumed by her passion, the girl allows her lover to dress her and give her drugs to sample. Later, after his death, she will sleep with strangers, taking coke to assuage her guilt at the thought he might have committed suicide over her. Yet their relationship had turned destructive toward the end, heralding the man’s mental breakdown. While the truth will remain ever obscure, the girl will eventually move on.

Overfreighted with the angst of youth, this novel is at its most impressive in its impressionistic evocation of a dazzling, dangerous cityscape.