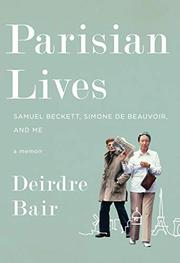 Samuel Beckett, Simone de Beauvoir, and Me: A Memoir

A biographer recalls the challenges of writing her first books.

Bair (Al Capone: His Life, Legacy, and Legend, 2016, etc.), who won a National Book Award for her first biography, of Samuel Beckett, and critical acclaim for her biography of Simone de Beauvoir, has been asked, time and again, “what were they really like?” In a candid and engrossing memoir, Bair creates unvarnished portraits of those two headstrong, demanding, and brilliant individuals as well as of her growth as a researcher, writer, and feminist. The author had just completed her doctoral dissertation on Beckett when she asked for his cooperation in writing his biography. He replied immediately, agreeing to meet her in Paris. “I will neither help nor hinder you,” he told her. “My friends and family will assist you and my enemies will find you soon enough.” During many years of research, she discovered the truth of his remark, as she interviewed scores of his friends, relatives, hangers-on, and vociferous enemies, all of whom she renders in lively detail. Although Beckett did not overtly interfere, he kept tabs on her research, often making her feel “like a marionette whose strings he was pulling.” After her book was published, she found that she had made her own enemies among critics and scholars she calls Becketteers, who reviewed her book with “unrelenting hostility.” Suffering “a minor breakdown,” Bair thought the biography would be her last. When an admiring editor encouraged her to think of a new subject, however, de Beauvoir quickly came to mind. She was, Bair thought, “the only modern woman who had made a success of everything,” an achievement that astonished Bair, who was juggling the responsibilities of a wife, mother, writer, and professor. She often considered the aging de Beauvoir to be “lumpy, dumpy, frumpy, and grumpy”; although agreeing to cooperate, she was reluctant to discuss sensitive issues, notably regarding sexuality. Besides offering privileged views of her celebrated subjects, Bair reveals herself struggling with structure and style and negotiating a world of publishing and academia not welcoming to women.

A rare, welcome look at the art and craft of biography.