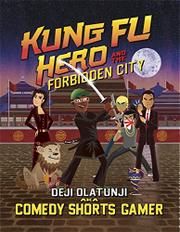 YouTube sensation ComedyShortsGamer takes his signature blend of hilarity and hijinks on an unbelievable journey into the fantastical Beijing underground with his brother/nemesis, KSI.

With over 9 million subscribers and 3 billion views on his YouTube channel, Olatunji has become an icon of sorts for his idiosyncratic mix of gamer culture, internet pranks, and viral challenges. First published in the U.K. in 2017, this graphic novel allows Olatunji to bring some of the more costly “crazy ideas that go on in [his] head” into print, embracing the adolescent ridiculousness that brought him and his brother international fame. The plot: In an effort to bring the family together—and get the boys away from video games—the Olatunjis take a family trip to Beijing, where one intricate Deji-led prank leads the Triad crime syndicate to believe he may have heroic kung-fu powers and pose a threat to their takeover of the Forbidden City. All this is further complicated with a stereotypical (if not just downright problematic) pseudo-Chinese mythological quest that has world-ending implications. These characters might as well have been stolen from bad gamer archetypes: the “smokin’ hot love interest,” the street punks and the crime boss with “bad ass haircuts,” and let’s not forget Shi—a beer-drinking, cigar-smoking, woman-ogling, “very inappropriate”–talking, animated Chinese lion dog statue. A clue to the tale’s end is noted in Deji’s introductory character bio: “It’s usually some freaky twist of fate that gets Deji out of sticky situations.” This whole ordeal seems nothing but a sticky situation.

Taking advantage of a very fast-growing fan base, this outing aims to expand Olatunji’s branded empire with a video game–inspired graphic fantasy but delivers nothing more than cheap prepubescent thrills.