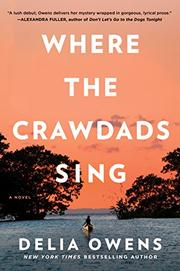 WHERE THE CRAWDADS SING

A wild child’s isolated, dirt-poor upbringing in a Southern coastal wilderness fails to shield her from heartbreak or an accusation of murder.

“The Marsh Girl,” “swamp trash”—Catherine “Kya” Clark is a figure of mystery and prejudice in the remote North Carolina coastal community of Barkley Cove in the 1950s and '60s. Abandoned by a mother no longer able to endure her drunken husband’s beatings and then by her four siblings, Kya grows up in the careless, sometimes-savage company of her father, who eventually disappears, too. Alone, virtually or actually, from age 6, Kya learns both to be self-sufficient and to find solace and company in her fertile natural surroundings. Owens (Secrets of the Savanna, 2006, etc.), the accomplished co-author of several nonfiction books on wildlife, is at her best reflecting Kya’s fascination with the birds, insects, dappled light, and shifting tides of the marshes. The girl’s collections of shells and feathers, her communion with the gulls, her exploration of the wetlands are evoked in lyrical phrasing which only occasionally tips into excess. But as the child turns teenager and is befriended by local boy Tate Walker, who teaches her to read, the novel settles into a less magical, more predictable pattern. Interspersed with Kya’s coming-of-age is the 1969 murder investigation arising from the discovery of a man’s body in the marsh. The victim is Chase Andrews, “star quarterback and town hot shot,” who was once Kya’s lover. In the eyes of a pair of semicomic local police officers, Kya will eventually become the chief suspect and must stand trial. By now the novel’s weaknesses have become apparent: the monochromatic characterization (good boy Tate, bad boy Chase) and implausibilities (Kya evolves into a polymath—a published writer, artist, and poet), yet the closing twist is perhaps its most memorable oddity.

Despite some distractions, there’s an irresistible charm to Owens’ first foray into nature-infused romantic fiction.