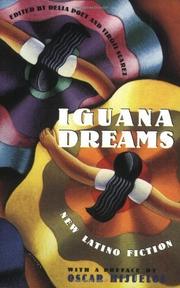 Groundbreaking anthology: 29 stories of varying quality by Latino authors writing in English. Cuban, Mexican, New Mexican, and Puerto Rican contributors predominate. The same themes are often repeated—childhood reminiscence, nostalgia for Cuba, character sketches, mean streets, questions of identity and assimilation, romance with ``real'' Americans, alienation between grandmothers and Americanized grandchildren—and they're sometimes handled in an accessible but almost school- essayish style with stock characters. Such material becomes not just informative, though, but fresh in the hands of Lionel G. Garcia writing about children at confession; of Ed Morales in his story of a dangerous Lower East Side block being gentrified; and of JosÇ Antonio Villarreal in two brief reminiscences. Chata, the cleaning lady created by Denise Ch†vez, is so alive that she all but jumps off the page. Ricardo Pau-Llosa's character Martes longs for Cuba but with a twist that leads to an encounter both satirical and surreal. Gustavo PÇrez-Firmat writes of attitudes toward Cuban and American women: a little bit sophomoric but a funny, punny cultural romp. On the very literary side, Alberto Alvaro R°os contributes an enchanting tale of a circus-train wreck, and Sandra Cisneros a lyrical character sketch. Ed Vega's complex story—about an HIV-positive Puerto Rican doctor who, among other matters, is tempted to seduce his promiscuous ex-wife out of revenge—probes the psychology of intelligence, how people hide from or come to knowledge. Several problematic pieces shift and then end abruptly, excerpts perhaps from novels. Most of the standout stories are by writers with limited or regional reputations, making this a valuable introduction to their work.