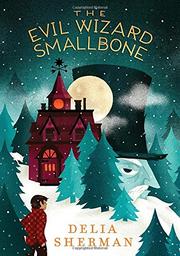 It is an enduring, unforgiving Maine winter when 12-year-old runaway Nick Reynaud seeks shelter on a frigid night by knocking on the door of small-town evil wizard Zachariah Smallbone.

When the evil wizard makes it known that he intends to hold Nick captive as his minion, Nick at first regrets his decision to run away from his abusive uncle and cousin. After completing his daily duties as the wizard's farmhand and housekeeper, Nick secretly explores the wizard’s bookshop. It is there that hilarious exchanges between Nick and the snarky magic books (whose conversations with him are rather like text messages) help him (and readers) move beyond the fact that he has been kidnapped by a cranky old man. Lurking about in the Maine woods is the arrogant, shape-shifting French werewolf wizard Fidelou, who wishes to conquer the quirky small town (sort of a cross between quaint coastal village and Hogsmeade) that has been ruled by the wizard Smallbone for centuries. Though Fidelou and his crew of biker werewolf minions add some dramatic distraction, it is Nick’s evolution into a young wizard that commands attention. Readers journey with Nick as he stumbles through what was real in his world, his grief at losing his mother, into a magical world that gives him a sense of purpose.

Fans of fantasy will be captivated—and hoping for a sequel.