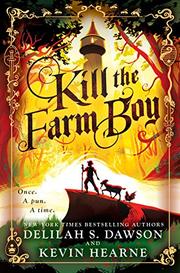 Worstley is a lowly farm boy who reeks of feces and angst. But when a nose-picking pixie informs him that he's the Chosen One and that he has a destiny, he sets off with a talking billy goat named Gustave to fulfill his glorious fate. Fia is a 7-foot tall warrioress who wears a chain-mail bikini and is on a quest of her own: to locate a rare flower allegedly high up in a magical tower. Poltro, the Dark Lord’s inept huntswoman, who is deathly afraid of chickens, is sent to locate the Chosen One and bring his heart back to her master. Their paths eventually converge when Fia, attempting to climb the thorn-infested magic tower via a rope made of human hair, falls and lands on Worstley, quite possibly killing him. In an effort to somehow save his life, Fia takes the Chosen One’s body and climbs back up the tower, laying him in a bed next to a princess who has been magically sleeping for decades. While exiting the tower, Fia meets Argabella, a female bard who has been cursed to look like a giant bunny. After collecting a Sand Witch named Grinda and Toby, the Dark Lord (who wears a fanny pack), the group of misfits sets off to rid the kingdom of the evil genius behind the terrible curses. The overturning of so many hackneyed fantasy conventions is a delight, as are the countless puns and jokes. But the narrative momentum suffers at times because the authors are so focused on the humor.

Tolkien’s Fellowship of the Ring on laughing gas.