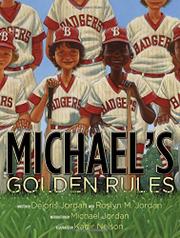 by Deloris Jordan with Roslyn Jordan & illustrated by Kadir Nelson

Michael Jordan’s mother and sister return with another story about his childhood, this one more didactic than Salt in His Shoes (2003). This one is a baseball story, wherein young Jonathan is upset after losing a game. His friend Michael and Michael’s Uncle Jack see this as an opportunity to teach Jonathan the ten golden rules of baseball, starting with “Know the game” and “Be a team player” and ending with “Practice, practice, practice” and “Have fun!” Jonathan follows the rules and plays hard, though his Badgers lose anyway, and he and Michael assure themselves that they feel good “because we all played together and gave our all.” Though purported to be a family story, it is only a vehicle for the moral, and has no energy of its own; even Nelson’s usual dramatic images cannot breathe any life into it. Someone, somewhere, needs to think about some golden rules of writing for children. (Picture book. 5-8)