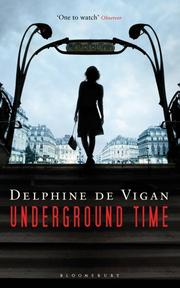 A prizewinner and bestseller in France, de Vigan (No and Me, 2010, etc.) is a master of the spare (and of despair) in this brief novel about two unhappy Parisians who may or may not be destined to meet.

The novel takes place during a single day, May 20, when a psychic has told widowed mother of three Mathilde that she will meet a man. Although her corporate job has become a nightmare since her supervisor Jacques turned against her months earlier after she mildly disagreed with him in front of others, Mathilde starts the day excited that something new is going to happen. She even laughs with her children, a moment that becomes more poignant in memory as her day falls apart. Meanwhile, elsewhere in Paris, Thibault, who has given up a safe suburban GP practice to be a traveling emergency doctor (his job does not quite translate in the U.S.), starts the day by breaking up with his unloving girlfriend, then makes his medical service calls in a mood that swings between rage and despair. When a woman falls at the metro station Mathilde helps her. Thibault is called but arrives just after Mathilde has left. Late getting to work, Mathilde discovers Jacques has moved her out of her office into a humiliating spot near the men’s room and has stripped her of all of her responsibilities. She and Jacques both know she cannot be fired, but he continues to ratchet up his campaign to make her work life increasingly miserable to the point of unbearable. As Mathilde wanders through the Kafkaesque corporate labyrinth, trying to find an escape from Jacque’s reach, Thibault drives the city streets overwhelmed by an exhausting caseload of patients whose lives have shriveled into hopelessness. Will these two ever meet? You’ll have to read the book to find out.

This is ultimately a corporate horror story—often claustrophobic to the point of oppressive, but undeniably disturbing.