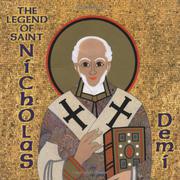 THE LEGEND OF SAINT NICHOLAS

by Demi & illustrated by Demi

Once again Demi has created an exquisitely illustrated introduction to the life of a famous historical figure, this time the saint from the third century who’s connected to the modern-day Santa Claus. The text recounts stories from the life of the saint, including miracles attributed to him, and how he became a saint after his death. Demi gracefully explains the celebration of the feast day of St. Nicholas in the Middle Ages, when St. Nicholas became Sinter Klaas, and how that character was transformed into our more modern Santa Claus. She includes information on St. Nicholas as the patron saint for many groups and concludes her text with the prayer of St. Nicholas. Demi’s paintings on each page are set off by thin gold borders, with each illustration including her signature use of metallic gold as well as brilliant jewel tones and delicate patterns of mosaics or patterned fabric. The handsome design includes ivory paper, deep red initial capitals and page borders, and striking endpapers that show St. Nicholas and Santa Claus in different costumes. Includes a map of the Middle East in the time of St. Nicholas. (Nonfiction. 7-10)