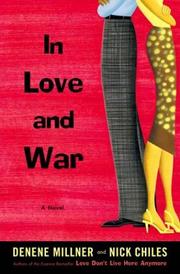 IN LOVE AND WAR

Another contemporary romance from the authors of Love Don’t Live Here Anymore (2002), etc.

Kenneth Roman doesn’t know quite what to say to a beautiful single mother who doesn’t want to listen. As a teacher and coach at a Teaneck high school, he’s seen a lot of kids get into serious trouble, and Zaria Chance’s son James may be headed in the wrong direction. He’s only trying to do the right thing by telling her about James’s difficulties—but, damn, talk about ingratitude. As far as Zaria can see, Mr. Roman has her pegged as a welfare queen from the ’hood, even though Zaria’s been raising her James and Jasmine alone ever since their no-account daddy disappeared, and she just so happens to make $60,000 a year as a university financial officer. If he doesn’t believe her, he can go and ask Principal Bell, a strong black woman herself, who won’t take kindly to any man questioning a black woman’s mothering. Sure, the principal’s seen plenty of triflin’ heffas who never should’ve had kids come and go, but Zaria isn’t one of them. Kenneth has to agree, to his chagrin, as he finds out more about Zaria and her family. Maybe his guilty secret is getting in the way of his better judgment: his own daughter Lane doesn’t live with him, and he’s not as a good a father to her as he wants to be. There aren’t enough hours in a day to do his job, get some exercise, keep up with family and friends, and maintain a social life—though there’s no one special in his life right now, besides Antoinette, who likes to show up every so often in nothing but a gold lamé raincoat. Zaria doesn’t have a man and doesn’t want one—but Kenneth Roman keeps coming around and she’s beginning to like him . . . .

Thoughtful and lively story from a husband-wife team who blend two distinctive voices into a seamless, satisfying whole.