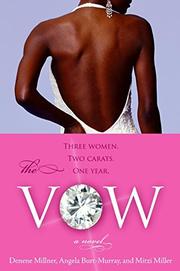 The path to true love is never smooth for three sexy black Los Angeles women who set a deadline for landing Mr. Right.

A New Year’s Eve wedding celebration spurs best friends Trista, Amaya and Viv to make a pledge to find themselves husbands within a 12-month period. Should be simple, right? After all, they have talent, beauty and drive to spare. But finding men does not seem to be the problem, just getting the right one to commit. Earthy single mom Viv longs for a full-time family with her son’s father, a successful plastic surgeon, but gets sidetracked by a smitten gangsta rapper; talent agent Trista seems to have met her match in smooth lawyer Garrett, but cannot get her college sweetheart Damon out of her mind; and starlet (and part-time hustler) Amaya hedges her bets with a strapping young basketball star in the hopes that her married music-mogul lover will become jealous enough to leave his movie star wife. This familiar story of friendship and self-realization from Millner (A Love Story, 2004, etc.), Teen People magazine executive editor Burt-Murray and Jane magazine associate editor Miller is peppered with Hollywood gossip about the African-American entertainment elite, along with several frank and funny sex scenes. These wannabe brides are far from chaste, and their unapologetic romps drive the love-yourself-first message better than some of the more conventional plot revelations. Through a series of crises that include a boyfriend on the down-low and a sick child, the friends are forced to face the flaws in their plan and deal with their own fears until they realize that they need each other far more than a ring.